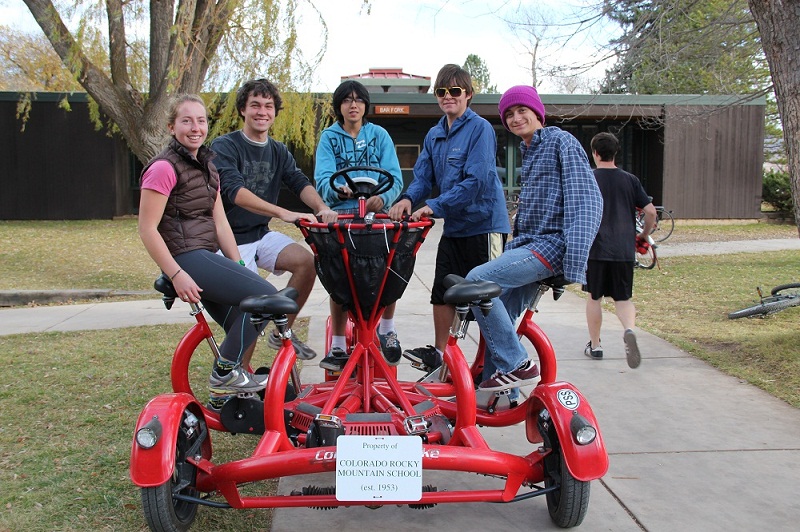 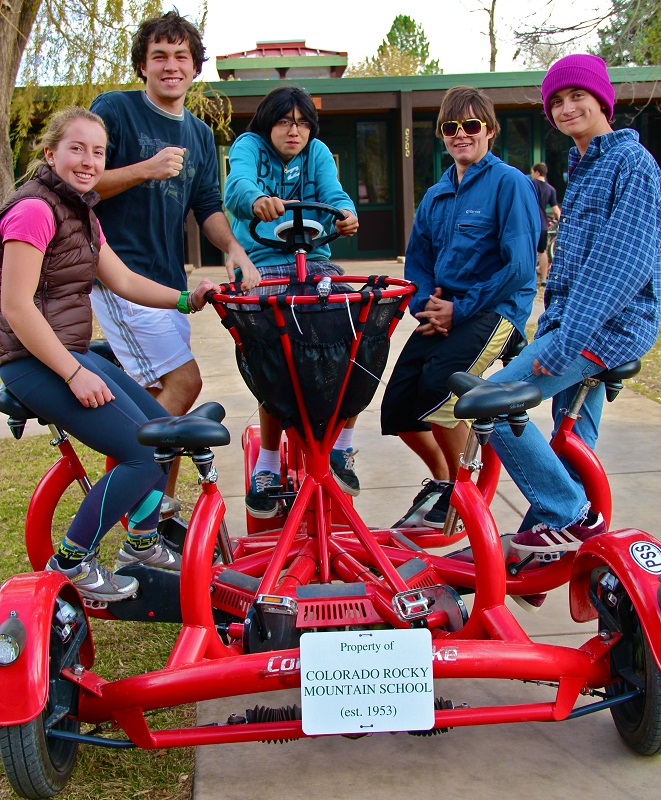 Alternative energy advocate Meg O’Shaughnessy was wintering in San Francisco when she had her first CoBi ride. “This is more fun than the proverbial barrel of monkeys!! I need to have one of these for my town.”

At 400 pounds, Colorado Rocky Mountain School’s new addition could be mistaken for a giant squid or spider, but in reality, “The Big Red” is a seven-seat bike that helps to re- enforce the concepts of cooperation and teamwork. The Combined Energy Vehicle, as it has come to be known, has been used around the world for corporate team building, to tour popular cities, a way for blind people to bike, and to transport employees. At CRMS the main reason for using the bike is to generate enthusiasm for alternative modes of transportation and capture people’s imaginations about the overall advantage and enjoyment of riding bikes. It is also a great tool for reminding other roadway users to “Share the Road,” lighten up, and enjoy the journey. By design, the bike allows a single driver to steer, brake, and pedal, with up to six other passengers also pedaling and enjoying the ride. The bike was donated to the school by Meg O’Shaughnessy, mother of alumni Josh Paigen ’03, and was one of the original pieces of artwork from Eric Staller’s collection. Staller started to make the bikes in New York in 2001 and, according to him, “The bright red color was chosen for the bike because it’s cheerful and (red) stands out for safety.” The bike started out as performance artwork, ridden by a crew wearing special black and white costumes. When Staller moved to Amsterdam in 1994, there was so much enthusiasm for this mode of transportation that he decided to develop it into a product. Today there are 300 bikes in 18 countries that are produced from Staller’s small factory in Hanover, Germany. CRMS Students get ready to pedal around on the Combined Energy Vehicle as part of sports training. On the CRMS campus, the Combined Energy Vehicle has sparked great enthusiasm from the students and community. Outdoor Program Director Darryl Fuller writes, “The students love it. They are fascinated and excited whenever they get a chance to ride on it.” Any CRMS group with an authorized adult driver can reserve and use the bike. When the bike is ridden to town, people are also just as fascinated, Fuller comments. “Cars stop in the middle of the road to gawk or ask questions. Almost everyone smiles. I haven’t yet noticed any annoyance or impatience from cars that are invariably held up by its slow progress (something you often can’t say when riding a regular two-wheeled bicycle).” The bike now belongs to CRMS on a full-time basis with the guidelines that O’Shaughnessy can borrow it for events in Paonia or elsewhere. As part of this donation, CRMS is also discussing how they are going to use the bike in town events, such as Bonedale Bike Week, and for general town-related bicycle advocacy.

Google Is Using the CoBi For Team-Building

Canadian CoBi Club Member Michel Is Up And Running In Quebec!