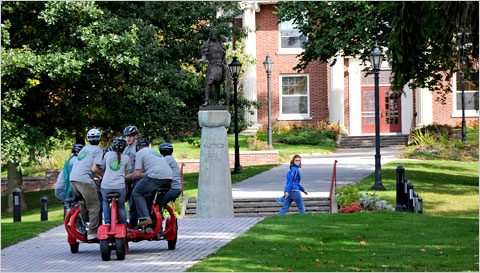 CoBi On Campus: Touring The University On A Bike 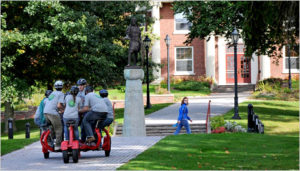 A special bicycle for campus tours at Alfred University. It is marketed on Alfred University’s Web site as “one-of-a-kind tour,” a seven-seat red bicycle cruising the grounds of the western New York State college, powered by the pedaling of prospective students and parents. The bicycle, like ones used by tourists in Baltimore, Budapest and New York City, is the latest acquisition of Alfred’s admissions office, and it debuted on campus last week. As The Choice recently noted, many colleges have been re-imagining their campus tours of late, eager to deliver “a more natural, spontaneous and, ideally, engaging experience.” Some are retaining consultants. One of those consultants, TargetX, recommended the party bike to Alfred this summer, in response to a student’s suggestion of launching a bike tour. The Conference Bike, as Alfred’s new contraption is called, is the 1991 invention of American artist Eric Staller. Manufactured in California, the bike is eight feet long and six feet wide, and it costs $14,750. It is promoted as having the power to lower its riders’ inhibitions, according to the manufacturer’s Web site, which says, “After just a few minutes even complete strangers begin talking to one another.” Wendy Beckemeyer, vice president of enrollment management at Alfred, sees value in the bike’s capacity to open people up to each other.

“It will change the conversation for the parents and students riding,” she said. “I think it will enhance it.” Students are enthusiastic. On the phone, Logan Goulett, a senior, was winded, having just returned from a ride. “It’s a workout!” she said. “You know, this campus isn’t flat.” Speaking on behalf of Alfred’s student tour guides, Ms. Goulett went on to say: “We all love it. It’s social in a way that the regular tour isn’t. It’s difficult at times, so you’re getting kind of sweaty. You’re laughing and you’re smiling. It’s an immediate bond.” Ms. Goulett said that if there’s an open seat, students are encouraged to jump on the bike as it tours, taking a spin around campus and giving visitors a sense of spontaneous, raw reality. The other day, she picked up two passersby to join her and a family from Elmira, N.Y. She conceded that within the university community, “There’s a little confusion over what it is.” But that intrigue might not be such a bad thing, said Nick Alberti, another student guide. “People see me and say, ‘You’re the guy on the bike.’ I’ve made some friends from it. It’s an interesting ice breaker.” There is no liability waiver for riders of the Conference Bike to sign, but, Ms. Beckemeryer said, given the harsh winters of Alfred, N.Y., the bike will be a seasonal offering. Per New York State law, riders 14 or younger are required to wear helmets, and there are also adult helmets on hand for passengers wanting them.

Canadian CoBi Club Member Michel Is Up And Running In Quebec!

Check Out The ConferenceBike On NBC!